The term morphology has been coined by Goethe in 1790 in his book Metamorphosis of Plants where he defines the concept of an original ideal plant “Urpflanze” from which all plants are derived by simple transformations.

In 1859, Darwin published On the Origin of Species where he theorized about the relationships between species. The transformations between species occur continuously at each generation through a process of descent with random modification. This understanding of the evolution of species comes from comparative anatomy.

Darwin’s work changed the world’s view on diversity and forms in nature. The observation and comparison of anatomy became a source of knowledge. Haeckel was a german naturalist who published artwork of comparative anatomy in 1904 in the book Kunstformen der Natur.

In 1917, D’Arcy Wentworth Thomson published On Growth And Form. As a mathematician, a physicist and a biologist, he worked on defining general laws to explain morphogenesis and transformation between species. His book has had a major influence during the 20th century.

In 1952, mathematician Alan Turing published The chemical basis of morphogenesis which remains a reference for our understanding of the emergence of patterns in homogeneous tissue. He shows using a non-linear system of equations how random local perturbations can lead to large scale spatial patterns.

This is one of the first attempts at explaining morphology as a self-organized system.

Embryogenesis is the process by which a single fertilized cell turns into a multicellular organism. Danio rerio, a.k.a. zebrafish, is a vertebrate model organism widely used in scientific research for studies of development.

This example shows how the processes of cell proliferation and cell motility combine into complex morphogenetic movements to form a highly structured multicellular organism.

Recent developments in microscopy imaging technologies have enabled the visualization of development at the single cell resolution.

The Drosophila melanogaster, a.k.a. fruit fly, is a major model organism for the study of developmental genetics. Here is an example of light sheet microscopy of the first hours of fruit fly development at single cell resolution.

In addition to cell proliferation and tissue morphogenesis, cells are differentiating during embryonic development. Even though each cell carry the same DNA, some of them will end up becoming muscles cells, whereas others will become part of the nervous system. Cell differentiation mainly occurs through changes in molecular content, such as protein distribution. The protein spatial localization is highly reproducible during development and lead to beautiful patterns.

Many images of gene expression are shared in openly accessible databases: Berkeley Drosophila Transcription Network Project, and the FlyEx Database.

Understanding the interplay between gene expression, protein spatial distribution and morphogenesis requires keeping track of the various dynamics in a dynamical atlas.

This atlas of gene expression has been obtained mainly by hand 20 years ago. One current challenge of developmental biology is to develop method for automatizing the construction of this kind of atlas using data-driven techniques.

In all areas of biology, there is a need for new visualizations to help researchers make sense of new and massive data sets.

Other model organisms are used for the study of cellular process, for example the sea urchin.

Visual representation of human embryonic development began as early as in Leonardo Da Vinci’s drawings in 1510.

Photographer Lennart Nilson has photographed embryos at various stages of growth, culminating in the bestseller 1965 book A child is born. The reception was very enthusiastic, see for example the cover of Life magazine. 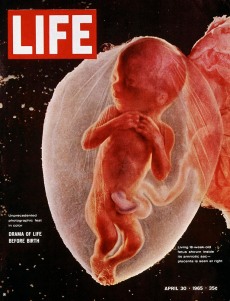 Morphogenesis in Architecture and Design

The concepts of morphogenesis have been used as sources of inspiration in architecture and design.