This year, I had the great opportunity to bring the project The Embryo Digital Atlas to Mozilla’s Global Sprint.

Mozilla’s Global Sprint is a fun, fast-paced and two-day collaborative event to hack and build projects for a healthy Internet. A diverse network of scientists, educators, artists, engineers and others come together in person and online to innovate in the open.

The numbers describing this event are pretty amazing: 108 open-source projects across more than 20 countries (65 physical locations from India and Portugal to the Netherlands, Kenya, Japan and the U.S.). Thanks to this event and all the resources of the Mozilla community and the Center for Data Arts, I have been able to start this project from scratch and obtain an awesome prototype in five months, all of this while pursuing my postdoc at Princeton and without knowledge of web programming beforehand.

After participating as a speaker to a community call about the fusion of art and science to meaningful ends, I attended the Working Open Workshop 2017 in Montreal. It was a two days workshop to learn the standards and practices of working Open (Open Source, Open Access, Open Data). I was invited to join by Aurelia. Here is the group picture:

Following this event, I started meeting every other week with my mentor Alissa to check on the project’s progress and the organization of the GitHub repository with up-to-date code of conduct, read me and contributing guidelines. At the same time, I was also invited to the MSL fellows bi-weekly call to discuss progress with Aurelia and was having regular meetings with Anne from the Center for Data Arts.

The first contributor who joined me was Jérôme, a friend from school now based in Montreal. He helped me built and optimize a first prototype of the interactive visualization tool using the three.js javascript library implementing WebGL in an user friendly way. This initial choice was recommended by Jaime and proved very useful.

I then discussed the visualization with Sam from the Center for Data Arts. He made some nice drawings about the possible ways of representing this complex information 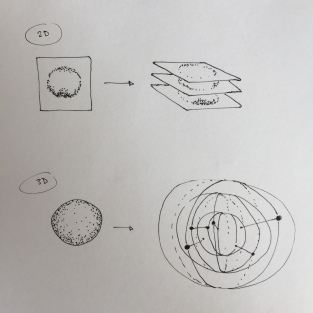 To get interesting data sets as a basis for the visualization, I began emailing scientists publishing papers with interesting datasets. Michael Schoppmeier sent me a couple of movies showing the development of the red flour beetle (Tribolium castaneum). And, through Princeton University, I got access to the raw data of a collection of human embryo images, they are presented on the Transparent Human Embryo website.

While the Global Sprint was getting closer, Abby interviewed me. It was featured on Mozilla Science Lab’s blog. It can be interesting here to recall one of the answer which explain the motivation behind this project:

Why did you start The Embryo Digital Atlas?

While working with experimental biologists at Princeton University, I started noticing that there were many datasets of embryogenesis that were sitting in the labs and were not necessarily published because they were not associated to positive results. I thought that they could be useful as public resources for the general understanding of embryogenesis.

At the same time, I was playing with some image datasets and found that the current visualization tools were either too generic or required a lot of expert knowledge. To find ways of making scientific image datasets easily and interactively accessible, I started to collaborate with designers and artists at the Center for Data Arts at The New School, leading to The Embryo Digital Atlas project.

Finally, the Global Sprint took place! I was at Mozilla’s office in Brooklyn, with this amazing view: 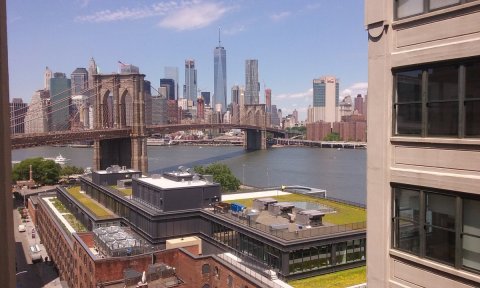 Sam was also there during most of the two days of the event. He is here on the right, looking very focused while I am discussing with April, who is leading The Method, an open-source peer-reviewed podcast about the state of science. The screen in the back was live streaming webcams from the other locations. Once a day we were having calls with all the other participants to showcase our progress and highlight contributors. We could also express ourselves in the common chat room on Gitter, or on twitter with the hashtag #mozsprint . 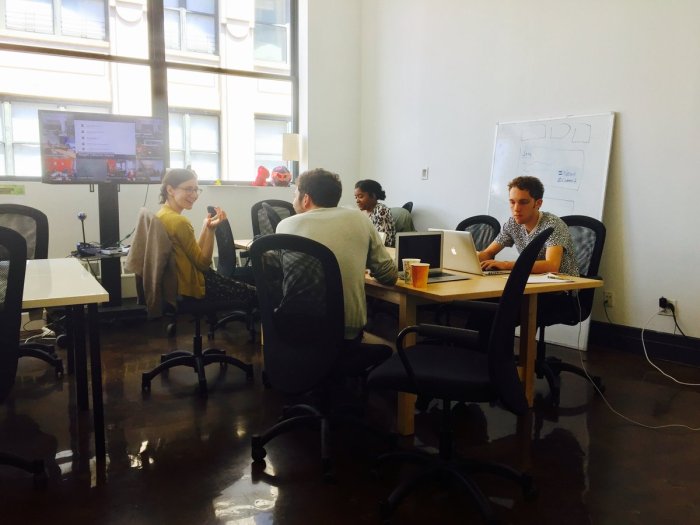 During the first day, we made a lot of progress on the website layout, with Alissa, who was in Montreal. She made a great work of transforming the mockups in html and css. After a first productive day of work between Sam, Alissa and me, we received a nice message from Christine on one of the issues on GitHub who expressed her intention to join the project. 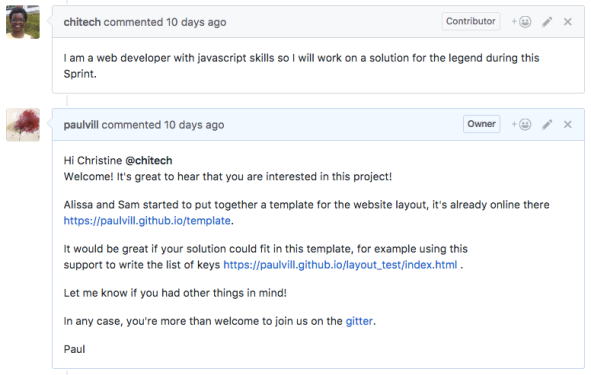 The second day, Jeff also joined us. Here is a picture where I am explaining him some of the concepts of interactive visualization of embryogenesis. 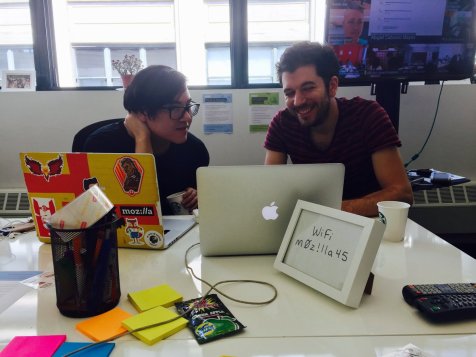 We also tried a game about privacy on the web. It was a lot of fun to play this game designed during the two days of the event: 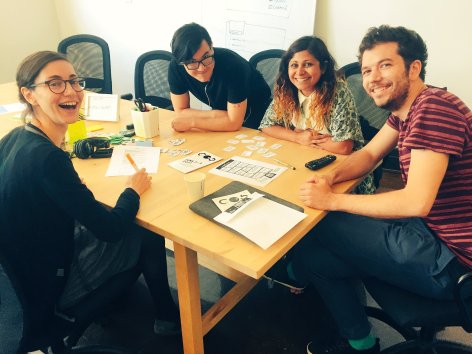 Now looking back at the project, it all started from a very basic website 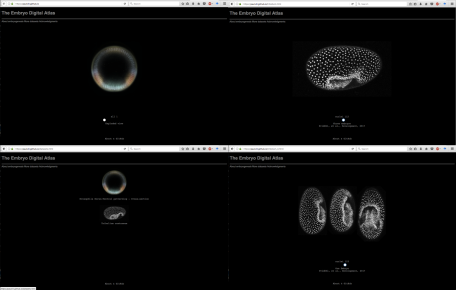 This is still a prototype and there are more features to come, but overall, I am truly grateful for all the contributions, for all the time invested in this project, and for everything I had the chance to learn in the past months. I would also like to thank my postdoc advisor Stas Shvartsman who has always been supportive of this project even though it would distract me from my work in his lab and Ben Rubin who opened me the doors of the Center for Data Arts at The New School. I really hope that this is only a starting point and that we will see The Embryo Digital Atlas grow as a community and as a resource to learn about embryogenesis and generate beautiful visualizations.